I had just finished the restoration of a 1972 Rickman-Montesa, and naturally sent pictures to a few friends. “Wow—that’s nice! Are you gonna ride that?”

My friend hit upon The Big Issue in the vintage motorcycle hobby/community: “Ride ’em or hide ’em”.

There are some that feel strongly that vintage bikes should be ridden, to truly appreciate them . . . and, I presume to “share” them with others, in a sense. Of course, to do that, one needs a motorcycle that is not only aesthetically, but also functionally restored. This will entail maintenance, time, and money–both at rebuild and in the future. Certainly, a “restored” motorcycle—new or old, ridden or not—should have a complete (and potentially functional, ideally) engine. Many antique enthusiasts agree: the AMCA (Antique Motorcycle Club of America)–like the AACA–insists that motorcycles entered for judging actually be run for the judges in shows. (The origin of this requirement, at least insofar as the AMCA, is said to be a bike entered for restored judging, many years ago, with only the shell of an engine, and no internals!) Most other venues do not insist on show bikes to demonstrate an operable engine.

Getting back to the ride-or-not-ride question, I think that decision–on whether a motorcycle is kept in operating condition and ridden, or not–is completely up to the owner. Furthermore, the it’s nobody’s else’s business. If you want to ride it, then ride it. If I want to sit & stare at it, I’ll do that. The practicality of riding old motorcycles enters into the equation, also. There’s a reason Jay Leno hires full-time garage personnel. Now, if an owner has a couple older street bikes, it’s probably fairly easy to maintain  them in running condition–keep the battery on your 60s Triumph or Honda charged, some fresh gas in the tank, and go for a fun, no-hassle road ride around the neighborhood every so often!

But if one is talking about an antique two-stroke off-road racing bike(s) (like the Rickman-Montesa, here), riding it probably makes little sense in most cases. I say that because:

*Racing bikes tend to break. Parts for them are expensive–and may be hard to source.

*Non-“long-travel suspension” bikes (like this Rickman, with 4″ travel in the rear, 6″ in front) are FAR less comfortable to ride than modern bikes. Riding one any distance really pounds a person.

*Off-road bikes must be ridden . . . well . . . off-road. That may equate to finding a track an hour or so away and trailering it there.

*Racing bikes require hours of pre- and post-riding maintenance, for every outing, to keep them working.

For some of the same reasons as I will probably not ride my Rickman, owners of other very old, or rare, or highly-tuned racing machines may choose not to operate their machines. The relative benefit of operating it, versus the chance of damaging it, may not be worth the risk. (One could take this argument to ridiculous ends: For example, does Smithsonian Air & Space insist that the historic aircraft in the collection be ready to fly? Or actually fly them? Should we demand that they take Chuck Yeager’s Glamorous Glennis off the ceiling, and out for a celebratory Mach 1 flight, this year? Hardly. And for the same reasons I’ve mentioned, above—only multiplied.)

Most guys, like me (with vintage dirt and dual-purpose bikes) have a few “riders” that are kept in running condition, and we keep the rest in mothballs. I’m actually unusual in that I have about 4 vintage bikes road-legal and ready to ride, with another couple vintage racing/off-road-type bikes ready. But, I will warn you that it sure takes a lot of time. I may back off the riding, in coming years (not that I do it much, anyway)–the effort to keep that many old two-strokes running just isn’t worth it, in comparison to so many things we could be doing, that need doing–families, church, other volunteering, etc. 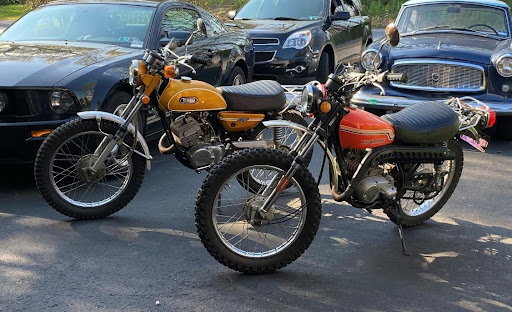 Vintage dual-purpose bikes like these (’71 Yam 175 and ’72 Kaw 100) are relatively easy to keep in running order and putt around the neighborhood on, on a Sunday afternoon—and are just funky enough to be fun and attract some pedestrian interest.

On the other hand, there are folks that achieve truly amazing ‘operational readiness’ (quoting an aviation term, as I can’t think of a better one) with their vintage bikes. I’m thinking of local collectors Bill Norton and his stable of ready-to-ride Vincents (Bill doesn’t bring a trailer to collect his classic motorcycles from museum shows—he just brings a little fresh gas and a battery!), and Al Hartman, who never seems to appear on the same antique Brit-bike, twice! I honestly don’t know how they do it.

Ultimately, whatever you do with your old bikes, enjoy them while you can!

2 thoughts on “Are You Gonna Ride That?”