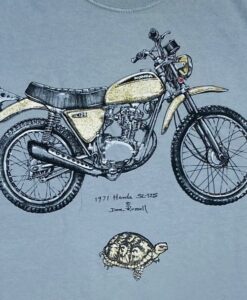 Let’s face it: if you’re of a certain age, admit you wanted one of these bikes! OK, so maybe the SL-125 wasn’t so fast (remember the “turtle chaser” nickname that DIRT BIKE gave it? Hence the little turtle in the art), but…what a looker! In my neck of the woods, we’d put a 4.00 knobby on the rear, take the lights off, remove the front fender (for that super-cool dirt/chopper hybrid look) and ride the trails in style!! And, they were mostly indestructible. (But don’t tell my childhood friend Terry that. Between us, we discovered that a Kawasaki 100–mine–would ably tow his SL-125…on several occassions.) The SL line, remains, in my opinion, one of the most attractive in motorcycling history. Show everyone you recognize great motorcycles AND art with one of our beautiful SL-125 shirts.  Hand Drawn, Hand Silk Screened, Limited Edition, Found Nowhere Else. 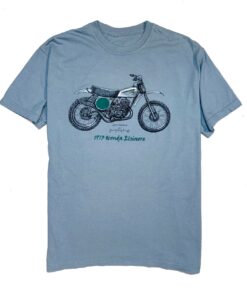